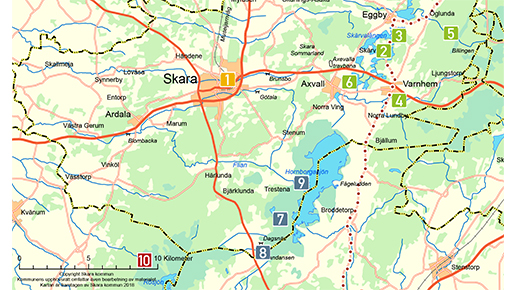 An urban savannah. A green zone with plenty of ancient trees and flowering herbs is found near the Cathedral in central Skara. It is a haven for bats, birds, butterflies and people. Enter it, and you will be surrounded by a green and peaceful bubble of calm. Read more

Höjentorp-Drottningkullen is the largest of six nature reserves in the Valle area. Walk for miles under the dense tree canopy across flowering pastures, lime-rich marshes dotted with dark forest tarns and through alder wetlands where alternate-leaved golden-saxifrage sparkles in spring. Read more

Flowering rocks and a royal connection. If the beautiful hills of Valle could be said to have a heart, it would be in the form of Höjentorp Castle Ruin. Royalty have enjoyed the verdant landscape and glittering lakes here for centuries. Read more

A journey throughout the ages on glass floors and through mazes. The 12th century Varnhem Abbey is one of the most visited destinations in Skara. From the abbey, you can continue among the ruins of the monastery and up to Kata Farm. Suddenly, beneath your feet, you will come across an even older church and the remains of a Viking woman who was a prominent figure here in early Christianity. Read more

Vertical cliffs and secret ravines. Jättadalen (Giants’ Valley) is the perfect place for giants with its wild cliffs and angular boulders that appear to have been thrown in anger. That said, it’s an advantage to be small at Öglunda Cave. Read more

From rattling gun fire to peaceful butterflies. Hundreds of years of war games and grazing livestock have turned Axevalla Moor into a large, flowering field where Arctic blues, forester moths and many other species of butterfly flutter about in the summer. Read more

A flying walk from leafy bowers to wide vistas. Children, birdwatchers and families enjoying their picnic are equally catered for at Ore backar. The path runs along the edge of a steep, winding esker. It makes you feel as if you were flying through the landscape. Read more

A spring festival of time-honoured choreography. Several fields at the southern end of Lake Hornborga have become a place where humans and cranes celebrate the arrival of spring to the cacophony of some 20,000 bills performing a natural score during a month of eating, flirting and dancing. Read more

Bird spotters’ paradise. At Utloppet, water from Lake Hornborga flows into the River Flian. The bird tower here is one of the best observation points on the lake, especially when the lake is frozen and the birds crowd together in the open channels. Read more

A vast and inaccessible moonscape. Rösjö Marsh is the largest wetland in Skaraborg County and a vast and solitary wilderness. It is rather hard to access, but from the point of view of the birds, it is conveniently situated only a few kilometres southwest of Lake Hornborga. Read more

Out and About - Visitor's Guide